The next time you hit a pothole in the road, blame your local health insurance or hospital CEO. Because your hard-earned healthcare premiums and tax dollars are literally going straight into their bonuses at the expense of infrastructure repair.

Exorbitant national health spending produces what economists call opportunity costs. Our healthcare spending takes away not just from infrastructure. Dollars spent on healthcare are also not available for education, state budgets, pension funds, and corporate profits, not to mention the national debt.

Healthcare spending is also eating through your own wallet into your lifestyle and livelihood. My earlier post cited this conclusion from a 2011 RAND Corporation study. It showed that rising healthcare costs completely offset all the average worker’s productivity-based take-home pay increases during the first decade of this new century. All of workers’ compensation raises went into paying health premiums, not into their paychecks.

Will the Oregon Health Plan Fix the Potholes?

Could the Oregon Health Plan of 1994 – championed by this Fixing U.S. Healthcare blogsite – fix U.S. healthcare and fill the potholes, as I’ve argued in these posts?

No, say Steven Brill and Elisabeth Rosenthal. Things have gotten so bad for so long that even the radical approach taken by Oregon 25 years ago will no longer be enough.

What Oregon (and I) Got Right

The Journal of the AMA (JAMA) recently released a landmark study comparing healthcare spending in the U.S. with spending in 10 other wealthy nations. It confirmed key claims made by Fixing U.S. Healthcare blog:

What the Experts (and I) Got Wrong

The conclusion is, as one health economist put it, “it’s the prices, stupid.” The JAMA study also lays blame on exorbitant administrative costs and exorbitant drug prices. But prices are the main explanation.

Why Oregon’s Approach Won’t Be Enough

If prices are the main driver of health spending in the U.S., then Oregon’s approach should work in theory to control costs. And indeed in 1994 Oregon did use cost-benefit analysis to single out wasted low-value, over-priced services. Oregon then stopped paying for them. This provided a competitive pressure that did constrain spending increases and reduced wasted care during the life of the plan.

But are prices the whole story now? Here’s some data that say not.  They suggest that healthcare has been in the grips of other powerful underlying forces, not just normal market pricing mechanisms. 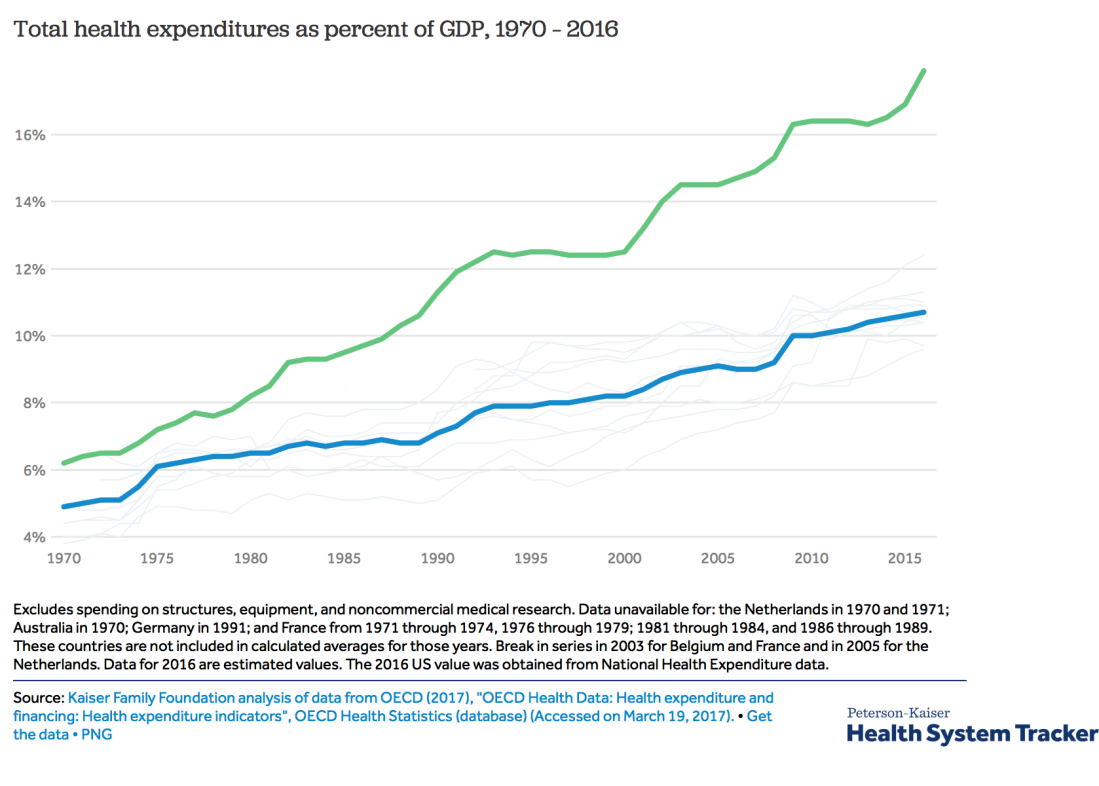 This graph compares healthcare spending as a percent of gross domestic product (GDP) in the U.S. and the same rich countries as the JAMA study (minus Sweden and Denmark). It shows that U.S. spending growth consistently outpaced growth in peer countries. In 1970 the figures were 6% in U.S. compared with 5% average in peer countries. By last year the figures were 18% and 10.6%.  Their spending doubled, but ours tripled.

On the one hand, this validates the JAMA study’s claim that prices account for the today’s difference in total healthcare spending between U.S. and other rich countries.

The Real Cause – Rigged System, Not Just High Prices

But why, then, should prices have increased so much faster in the U.S. than in other countries over the last 40 years? Steven Brill and Elisabeth Rosenthal may have the answer.

Brill’s new book, Tailspin, reveals how over the last five decades a new “best and brightest” meritocracy rigged not only healthcare, but also the entire American financial, legal, and political system to build “moats” of protection to perpetuate their wealth and power.

Mind you, most of these ingenious, ambitious, and hard-working innovators were trying at first to make the world better.  They assumed that their wealth and power was a natural reward for their achievements. And their achievements were many, not only in medicine, but also in technology, finance, law, and the global economy.  But along the way, many of these meritocratic elites lost sight of their original focus on the common good.  They slipped little by little toward defending their own advantages, eventually at the expense of the common good.

The result is an interlocking system of payment schemes, regulations, laws, Supreme Court decisions, financing arrangements, and monopolies that have become impenetrable. This is also why pensions are going broke, Wall Street is out of control, and why our politics is paralyzed. And why Americans have sunk into cynicism, despair, and reckless political gyrations.

Can Americans Un-Rig the System?

But Brill asks, Can the moats be breeched? And can average Americans reclaim their dream of a fair shot at life, liberty, and the pursuit of happiness?

If Brill is correct with his analysis, it will take a lot more than the Oregon Health Plan to fix U.S. healthcare.  And a lot more to be able to fill our potholes.

However, Brill sees reason for hope. Check out the next blog post for more on what this means for fixing U.S. healthcare in the 21stcentury.