This segment reviews the relentless growth of healthcare spending in the U.S.

In Segments 2 & 3, we looked at the history of medical care in the U.S. and the birth of employer-based health insurance, along with landmark enactment Medicare and Medicaid. We looked at failed healthcare reform initiatives. This history tells us how we got today’s remarkable advances in medical technology but lackluster health system performance overall.

In Segment 4, we will zero in on the perennial problem of rising costs. We will look at how healthcare costs have grown over time and how we compare to other countries.

Then in Segment 5 & 6, we will ask, why is healthcare so expensive in the US, and is it worth the money? And we will talk about the effects of exorbitant healthcare costs on politics, economy, society and even our future success as a nation.

Let’s start with a startling fact. Between 1999 and 2009 Americans’ productivity grew by 30%. According to a Rand study, average Americans’ total monthly compensation grew from $6,350 dollars to $8,260 dollars. But all this increase went into healthcare premiums (shown in red), not into their paychecks (shown in blue). 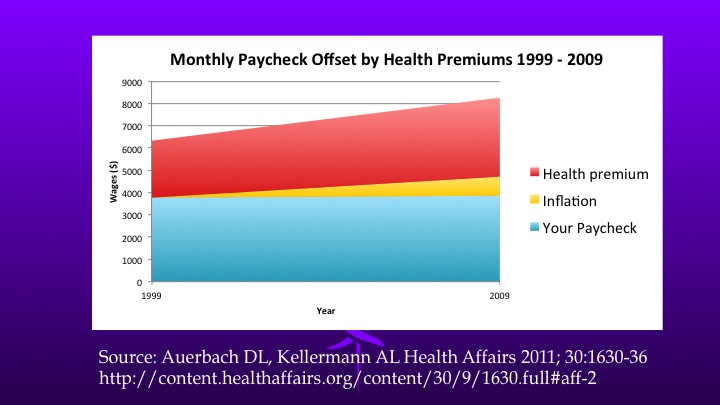 Even though employers paid out more for the average American family, we felt no richer. The culprit was the health system.

Here are some more statistics that show the extent of the cost problem. 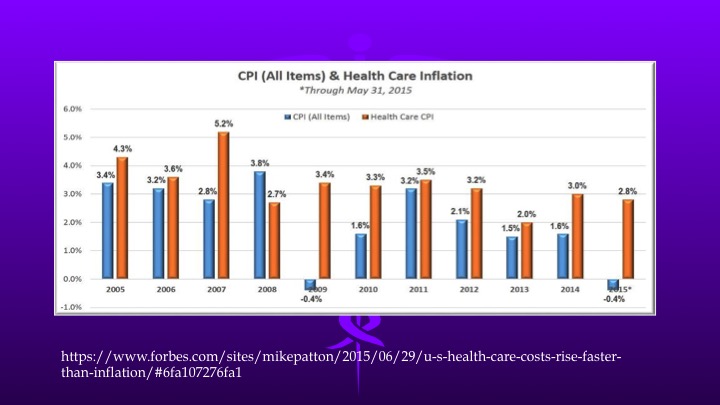 The next graph shows growth in healthcare spending as a percent of total gross domestic product. This graph goes up to 2014 at 17.4% of GDP. The figure for 2015 was 18%, for a total of 3.2 trillion dollars. This is one-sixth of the entire US economy, directly employing one of every 9 workers, according to NY Times.

Let’s compare the US with other countries. This first graph shows that in developed countries, health spending goes up as income goes up, until income reaches $100,000 and then levels off. Except in the US, where we spend an inordinate amount on healthcare.

Here are the totals for developed countries – blue for public spending and red for private. US is on the left, head and shoulders above the rest. 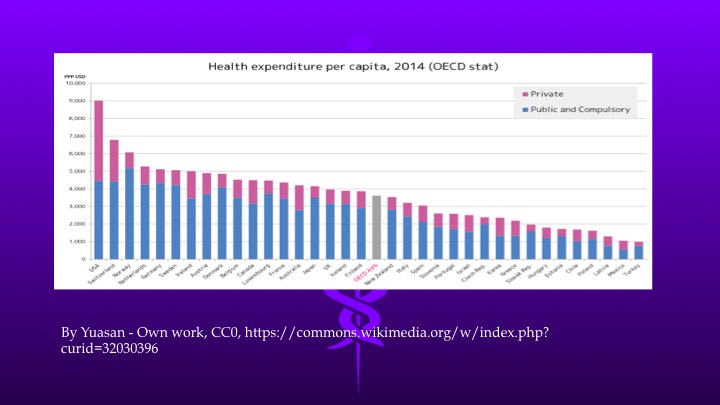 So, what are the repercussions of all this healthcare spending?

We already talked about its effect on paychecks. Healthcare also adds to the cost of goods; for example GM says that healthcare adds 1500 to 2000 dollars to the cost of every automobile in the showroom. This affects both the consumer but also corporate bottom lines. It is also affecting budgets of state and local governments, including pension fund health costs.

Health costs have also taken an increasing chunk of federal spending, growing from around 7% after Medicare was passed in 1965 to almost 29% now of the entire federal budget. It competes with defense, education, and infrastructure.

Why are costs so high? And why so much more in the US than in other countries? Th answer is a perfect storm of bad reasons.

We will cover these in Segment 5. I’ll see you then.

This video is #4 in the series Dr MacLean Explains… about the U.S. healthcare problem and how to fix it. This segment reviews the relentless growth of healthcare spending in the U.S.

– Why Can’t America Have A Grown-Up Healthcare Conversation? https://www.youtube.com/watch?v=09RvU9_m30Q&feature=youtu.be