In Segment 2, we looked at the history of medical care in the U.S. until 1965, the year Congress enacted Medicare and Medicaid.

In Segment 3 we will look at reform movements, starting with Medicare and Medicaid. We will look at why later reforms failed and where that leaves us now.

By the early 1960s, nearly all employees were covered by Blue Cross/Blue Shield.

But problems emerged. First, low-wage workers were often not covered by their small businesses, and elderly retirees were not covered. Costs were going up because pre-paid insurance increased patient demand for services. Harry Truman had proposed national health insurance after he surprisingly was re-elected in 1948. But the AMA launched a multi-million-dollar publicity campaign to deride the plan as “Communism” and “socialized medicine.” Truman’s public insurance plan failed.

The next attempt at reform was successful – the 1965 passage of Medicare and Medicaid. Lyndon Johnson succeeded because coverage targeted the uninsured poor-and- elderly, leaving the rest of the private for-profit health system unaffected.

Senator Teddy Kennedy tried in 1971 to extend Johnson’s success to build a single-payer system, and won support from President Nixon. But this plan was derailed by the Watergate scandal.

The next attempt came from Bill and Hillary Clinton. After Clinton took office in 1992, Hillary and expert panels devised a plan for universal coverage including essential benefits and pre-existing conditions with mandated employer insurance and expanded Medicaid. This plan failed because the insurance industry launched a stinging publicity campaign featuring a down-home couple named “Harry and Louise.” Americans also balked at the tax increases needed to fund it. 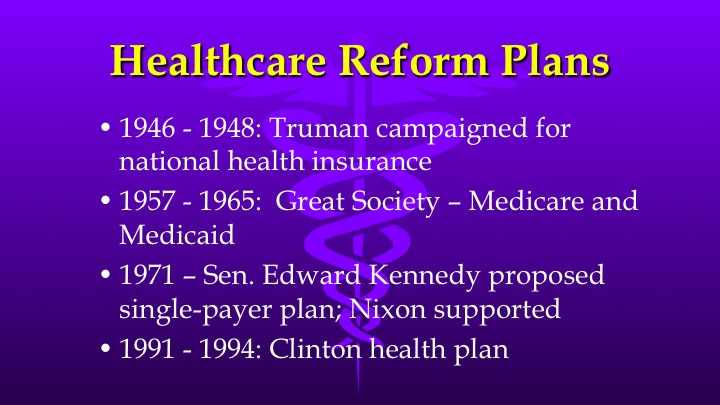 The Clinton’s failure made it necessary to find another solution to rising costs. Managed care, which had first appeared in 1973, became that solution. And it did work, slowing growth to under 6%. But around the year 2000 came a backlash over mammograms and so-called “drive-by” deliveries, which undermined the ability of managed care to control costs.

What do we make of this history? Here are the main take-aways that help us understand our present health system. First, there has always been a tension between the profit motive in the free marketplace and a health promotion motive. Second, Americans have given special treatments to the health industry in return for medical advances. And third, powerful vested interests (doctors, hospitals, insurance, drug companies) have often used polemics and ideological arguments to defend their favored status, not necessarily actual health outcome data. 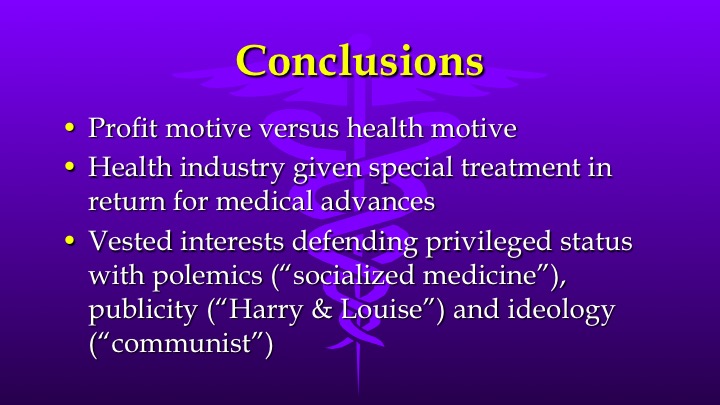 So, this leaves the US with the largest, most expensive healthcare system in the world. In 2011 shown here it took in payments of 2.7 trillion dollars, mostly private insurance, Medicare, Medicaid and out-of-pocket. The figure for 2015 was 3.2 trillion dollars, representing 1/6 of the entire economy of the entire Gross Domestic Product. Government’s share of payments was almost 50% in 2016. 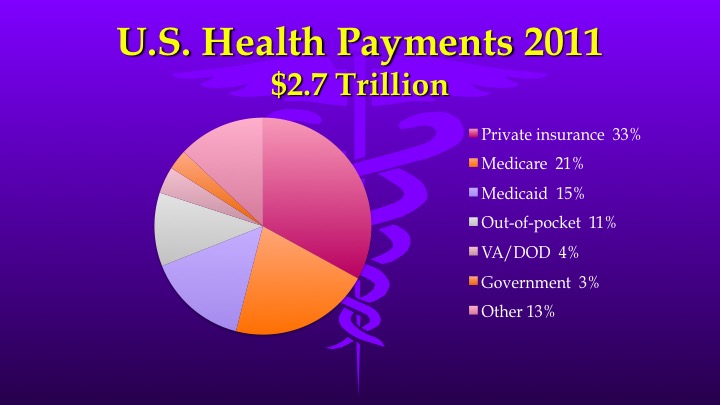 This graph shows the dollars spent in 2011 – mostly on hospitals, doctors, drugs, long-term care. Remember that 25% of this pie graph actually goes to administrative costs, not medical services. 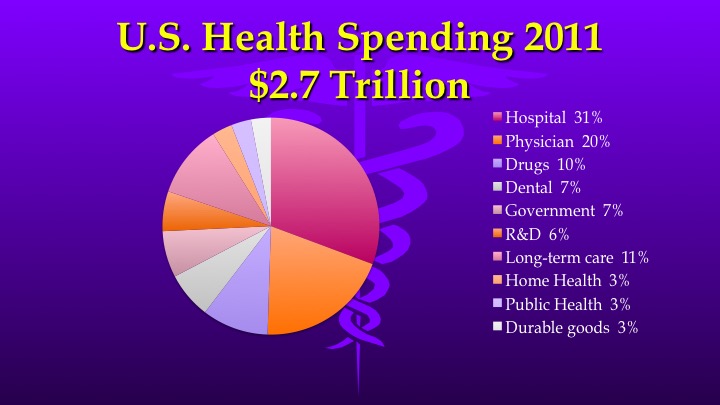 In defense of U.S. healthcare, in 2012 then-House-Speaker John Boehner and then Senate Minority Leader Mitch McConnell famously said, “the U.S. has the finest health care system in the world,” and further that “wealthy foreigners flock to the U.S. because of its cutting edge facilities.” 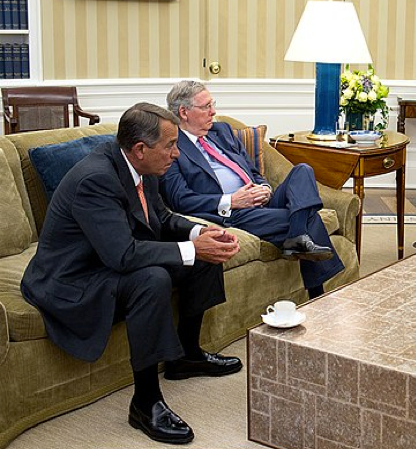 However, the World Health Organization rates the U.S. 15th in performance (life expectancy and delays in care), and only 37th in overall attainment (including financial and service fairness).

In 2015 the Kaiser Foundation compared the US with 10 other developed countries. Here are their results showing areas in which US is better, equal or lacking.

Here are the Commonwealth Fund’s 20-11 rankings – US is in the middle of the pack for most areas but dead last on several others and overall rank. 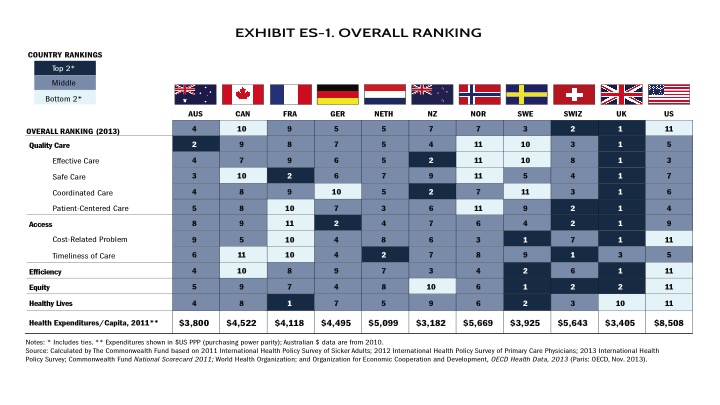 What about “foreigners flocking-for-care”? This pertains to highly specialized treatments available only in certain centers such as Mayo, Cleveland Clinic or Hopkins. Some centers in Florida and Texas do market to wealthy foreigners, who pay the full charge in cash, not discounted insurance rates like the rest or us. Boehner and McConnell pointed to Canadians coming to Michigan hospitals, but the Commonwealth study found that Canada is worst in timeliness and 10th worst overall, just ahead of the US in 11th place, so not surprising.

The further truth is that, according to Centers for Disease Control, 3/4 million Americans go abroad each year for medical treatments, such as for holistic care or dental care, but mostly seeking lower cost.

In the next Segment we will talk about cost, namely how the rising cost of healthcare is affecting our economy, our politics, our society – and some say our very existence.

This video is #3 in the series Dr MacLean Explains… about the U.S. healthcare problem and how to fix it. This segment reviews previous attempts at reform and the current state of the healthcare system.