In Segment 2, I will answer the question, How Did We Get Here? I’ll give a whirlwind tour of the history of medical care in the U.S., and I’ll also look at the birth of health insurance.

Let’s start with looking at healthcare in the Colonial period. The most famous doctor at the time was Benjamin Rush. He – like most reputable professionals of the day – got his medical training in Europe, in his case Edinburgh, Scotland, the leading medical center of the time. Rush was a signer of the Declaration of Independence and served in the Revolutionary Army. He became the “father of American psychiatry” because of his interest in mental illness as a disease, not demon possession. 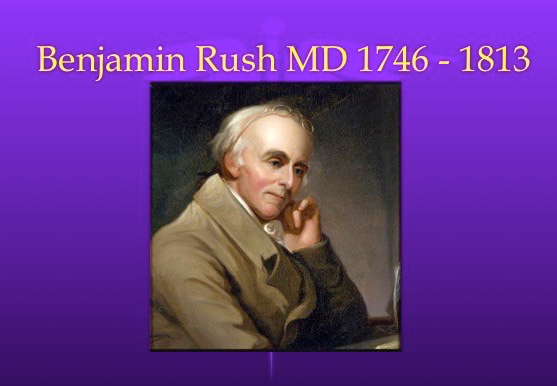 Rush and other orthodox practitioners in the early Republic –trained in the scientific European tradition– faced competition from a panoply of practitioners in an unlicensed, unregulated “free market.” They peddled nostrums like snake oil and procedures such as blood-letting. Doctors of all types trained like apprentices. The sick were cared for in their homes, with the poor going to almshouses and mentally ill to asylums. Port cities did have public pesthouses for quarantines.

By mid-19th century, orthodox doctors began trying to solidify their place in the market. They did this through training at medical schools, beginning with Harvard, Dartmouth, College of Philadelphia (which eventually became the University of Pennsylvania) and King’s College (which eventually became Columbia). But by 1850 there were now 42 medical schools that often were little more than diploma mills. The course consisted of only two semesters of 3 months each. The medical school needed only 4 faculty, 1 classroom, 1 dissection lab and a charter to grant degrees. These schools were highly profitable.

In 1847, the AMA (American Medical Association) was founded by the orthodox physicians.

Meanwhile, the era of scientific medicine was blossoming in Austria, Britain, Germany and France. Here are some milestones – anesthesia, microbiology study of invisible germs, antiseptic surgery technique and x-rays.

In America, by the turn of the century, doctors and the AMA sought to further shore up their legitimacy by reforming medical education. States began requiring more formal education as a condition for licensure. The Association of Medical Colleges was founded in 1876. In 1893, Dr. William Welch brought to Johns Hopkins University the German model of education based on 3 or 4 years of training in clinical sciences. Industrialist and philanthropist Andrew Carnegie hired Abraham Flexner in 1910 to draw up a blueprint for medical school reform. Flexner is widely credited with ushering in the era of modern medicine in this country.

In the early 20th century, doctors enjoyed prestige and independence. Courts rules against corporations practicing medicine, ensuring the pre-eminence of private practice. Doctors joined together in hospitals to take care of growing populations in big cities, and to exploit emerging surgical and diagnostic technologies.

This brings us to health insurance. Surgery (which made great advances during the Civil War and World War I) and hospitals were becoming expensive. So in 1929, Baylor College started the first pre-paid hospital insurance. Baylor’s 1,200 teachers each paid 50 cents per month to cover up to 21 days of hospitalization. Surgeons and hospitals quickly embraced this arrangement, and the Baylor plan became the Blue Cross plan in Minnesota in 1933 and Texas in 1934. By 1950, just 15 years later, Blue Cross covered 57% of the population.

Here’s how it happened. After World War I, the war-torn countries of Europe, like Germany, were in turmoil. Social insurance, including healthcare, helped reestablish some social stability there. But in this country, politicians opposed Teddy Roosevelt’s plan to set up national health insurance for factory workers, calling public insurance a “Prussian menace”. Labor unions saw public health insurance as an encroachment on their special role to ensure worker benefits. The AMA also opposed public health insurance as a potential “interference with the practice of medicine.”

Let’s summarize the history of medicine from Rush to Medicare. In the Colonial period and early Republic there was intense competition among doctors of all stripes, those that tried to understand the scientific basis of disease and those who peddled remedies on a trial-and-error basis (referred to as “empirical”), relying mostly on their placebo effect. We still see vestiges of this early competition today in the rivalry between MDs, DOs, chiropractors and podiatrists. During the industrial period, little by little science-based orthodox physicians in the European tradition prevailed over their rivals introducing advances in surgery, diagnosis and infection control. They shored up their gains with institutions such as the AMA, hospitals, and eventually insurance.

In the next Segment, we will look at reform movements, starting with Medicare and Medicaid in the 1960s. We will also look at why later reforms failed and where that leaves us now.

How Did We Get Here? – Brief History of US Healthcare

This video is #2 in the series Dr MacLean Explains… about the U.S. healthcare problem and how to fix it. This segment reviews a brief history of U.S. healthcare from colonial times to 1960 to shed light on the current state of healthcare.