This segment reviews the “Big Fix,” based on the idea of setting limits fairly. It describes the success of the Oregon Health Plan of 1994.

In the first 8 Episodes, we have reviewed the evolution of the US healthcare delivery system and insurance system. We have identified the relentless growth of healthcare spending as the root of the problem. And how rising costs are literally built into the system as it is now. Finally we have looked at American traditions and values that we all agree on, and we identified loaded political words and the seeming conflict between market justice and social justice that voters disagree on. 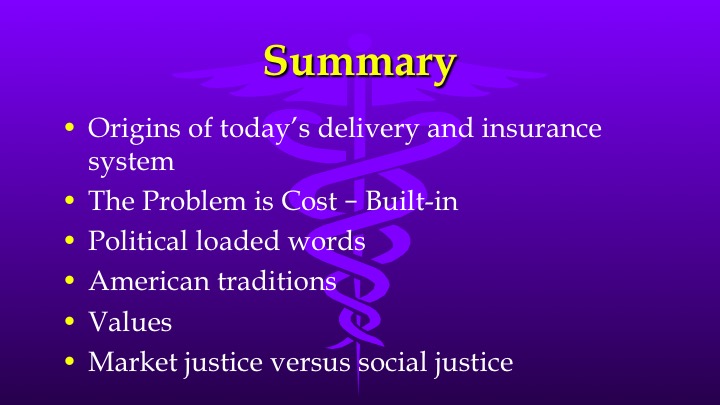 Based on this understanding of the US healthcare system, we are now ready to look at what I’m calling the Big Fix. It is based on the idea of setting limits fairly. You’ll be surprised to know that it was already tried 20 years ago in Oregon. And it worked! 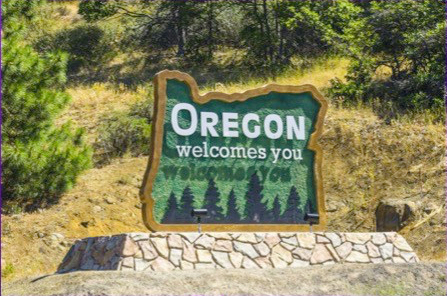 So, let me tell you the story of the Oregon Health Plan. It all starts with a Roseburg Oregon emergency room doctor named John Kitzhaber. Half of his ER patients – as everywhere – were not real emergencies, just uninsured patients with no other place to get healthcare. 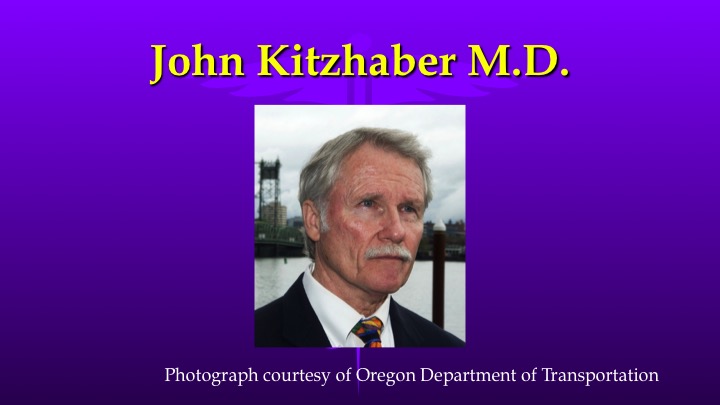 So in 1989 when the Medicaid budget was being cut, he realized that many Medicaid patients would lose coverage, and would be flooding into his ER. Unless something was done.

He came up with an idea. Rather than keep the same level of benefits and cut patients, why not keep all the patients on Medicaid but limit their benefits? He formed a non-profit group to lobby for these low-income patients. This propelled him to the state senate and eventually to the governorship. He first created a list of 709 diagnosis-treatment pairs ranked by the dollar cost per life saved by each treatment (or “quality-adjusted-life-year”). 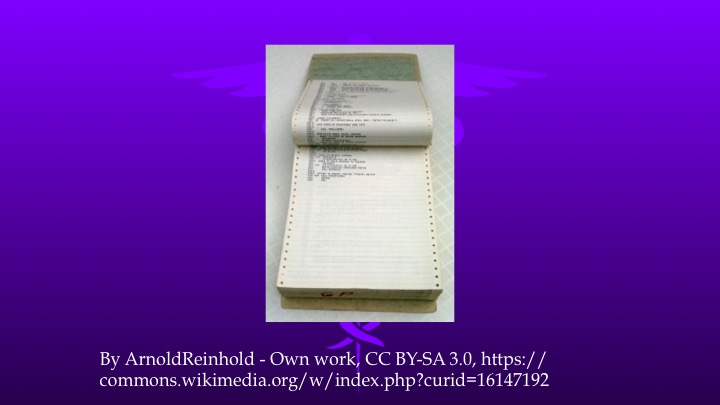 But this produced some odd results, for example ranking lower-cost dental care above life-saving appendectomies. And so he next organized 60 town hall meetings to re-prioritize the list with common-sense consumer input. Actuaries then calculated the line (Line 581) above which the fixed Medicaid budget could cover all eligible patients. The final list gave priority to life-saving treatments such as antibiotics for pneumonia and appendectomy for appendicitis, as well as to proven effective treatments for heart disease and treatable cancers. It also included routine preventive care, maternal care, newborn care, well-child care and preventive dental care. Kidney dialysis was covered above the Line. The list did not cover conditions like remedies for the common cold that get better on their own, conditions where “home” treatment is effective like sprains, ineffective or futile care such as surgery for most back pains or aggressive treatment of end-stage cancer. For those terminal cancers, it did cover comfort care.

Here are the other main provisions of the Oregon Health Plan. By eliminating low-value health services, it was able to cover 100 percent of low-income citizens. The combination of sound research and consumer input gained it public acceptance. 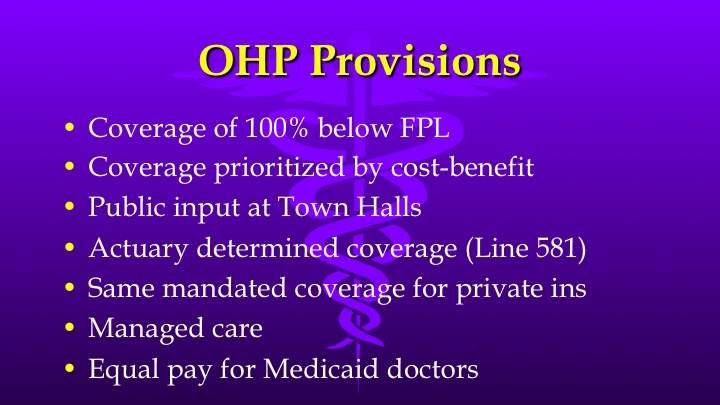 Here is the time line for the Oregon Health Plan. It actually took 5 years to gather public input and then to get necessary federal waivers approved. 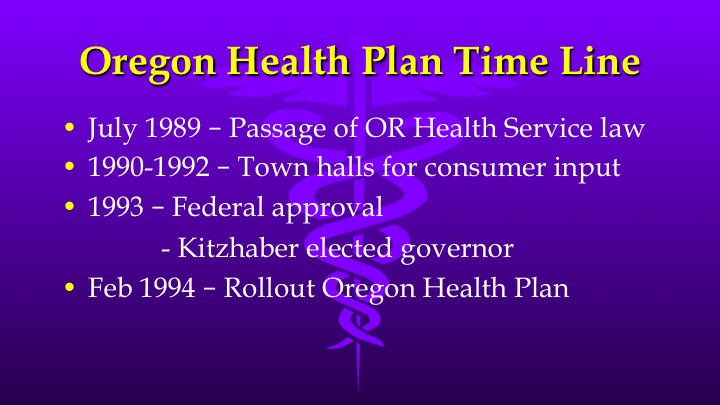 Here is a summary of the key successes of the Oregon Health Plan. Oregon was able to extend plan eligibility of those below federal poverty level from 57% to all 100%. This meant 100,000 more Oregonians on Medicaid. However 65,000 still did not enroll, presumably due to complicated enrollment procedures or copays up to $28. Total uninsured in Oregon did drop from 18% to 11%. Most importantly, Medicaid stayed within its budget. Medicaid physicians were paid on a par with others, resulting in robust doctor participation and 88% patient satisfaction. 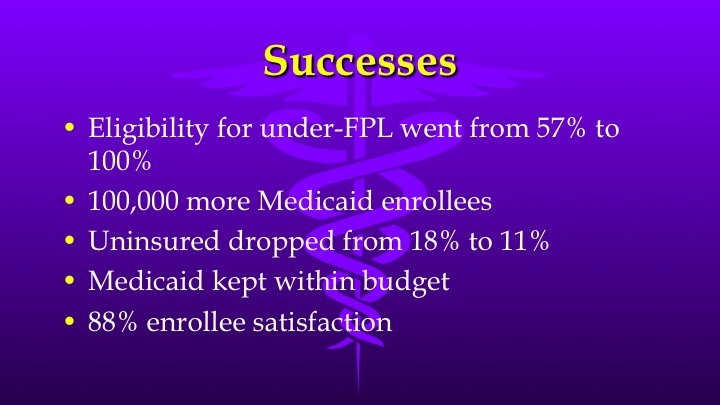 Let’s pause to consider a key question, Is it ethical to limit health benefits for low-income patients? Philosopher Paul Menzel (who I introduced in the last Segment) gives a resounding Yes. Here is his thinking. The right to prioritize healthcare services is especially important for lower-income patients. If they were given their Medicaid premium in the form of cash, many would spend only 33% of it on healthcare because they have more pressing needs for food, clothing, and shelter. Menzel also points out that these low-income patients would gladly accept a package of more restricted health services in exchange for first-dollar coverage. Lower-income patients live from paycheck to paycheck and don’t want the uncertainty of a large unexpected medical bill. Medicaid patients want healthcare insurance, but neither they – nor society at large – should pay more than it’s worth to them. 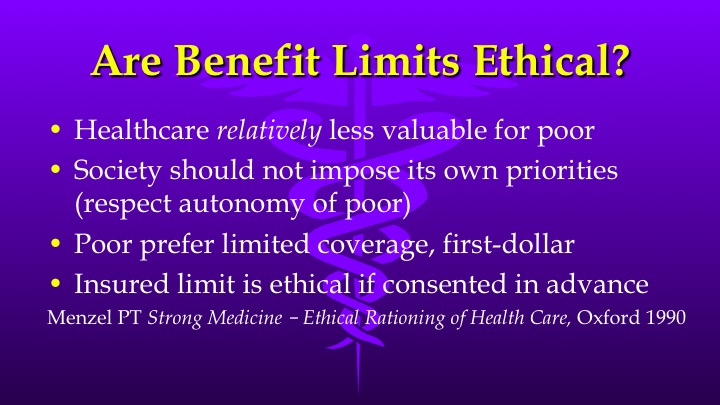 In plain language, lower-income patients – and other savvy insurance buyers — need the real choice for a lower-cost package of limited health benefits that is “worth the money,” not just a menu of higher deductibles and copays but the same old package of exorbitantly costly, low-value care.

Please notice that this idea blends both market justice and social justice. It acknowledges that low-income patients are not entitled to everything, no matter what the cost. But it also provides for them a package that they – and society – think is costworthy. And does so with their consent freely given. Costworthy care is one of the key features of a fair health system, according to Menzel, as we saw in the last Segment, and consent is a key principle.

It is instructive to look at the fate of the Oregon Health Plan over the 8 years of its existence. Here is what happened. The legislature cut taxes. Healthcare costs rose with inflation. Oregon tried to get the poor to accept higher co-pays, but they could not afford them and so dropped out. Eventually these patients went back to traditional Medicaid or became uninsured again, spelling the end of the Oregon Health Plan. 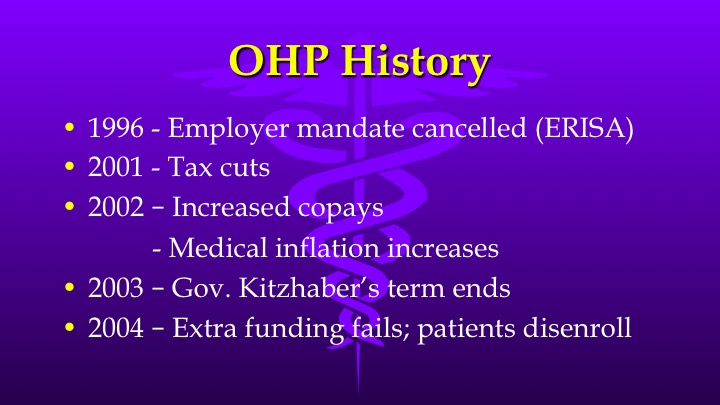 What are the lessons to be learned? 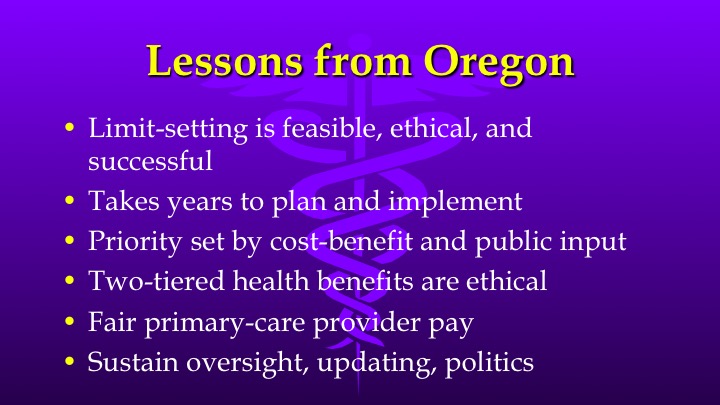 Third, healthcare priority setting should be informed by cost-benefit research but driven by public participation, respecting minority rights and protection of the sick and vulnerable.

Fourth, two-tiered health benefits packages – one lower-cost and one higher-cost – is politically feasible and ethically acceptable (but so-called Essential Benefits should not arbitrarily cut entire categories of benefits like maternity care).

This is a critical point, because the casual observer might conclude that the Oregon Health Plan failed in 2002.

But I argue that the fact that the Plan was designed, politically adopted, implemented and sustained for 8 years proves the concept that limit setting can work, but also shows that something so big and so intricate needs ongoing political and administrative energy to sustain it.

Of course I have over-simplified the Oregon Health Plan. There are innumerable technical, legal, budgetary and administrative details involved.

Also, adopting a plan like Oregon’s today would need us to take into account 20 more years of research since then, with some very expensive but very effective treatments newly available. There are also many ethical nuances, such as should we budget for one patient needing a $100,000 treatment in place of 100 patients with $1,000 treatments, or vice-versa? But Oregon showed that all these issues can be managed in an orderly fashion.

I have also over-simplified that merely adopting the Oregon Health Plan cost-benefit method for limit setting would solve the entire cost problem. For example, many commentators have exposed the quirks of the US healthcare system that result in over-pricing, as discussed in Segment 5. That means that the same drugs, tests or treatments cost 2 to 10 times more in the US than in other countries. Those quirks should each be addressed in policies and regulations.

But the basic idea of fair limit setting – call it rationing, if you like – is the key, in my opinion. Limit setting would firmly challenge the common presumption that all healthcare is equally cost-worthy. It would put on notice the vested interests: if they play games with exorbitant pricing, they would ultimately lower their benefit-for-cost below the cut-off point, and drop themselves off the covered list altogether.

In the final Segment, I will talk about what each of us can do to promote health system reform and cost control.

This video is #9 in the series Dr MacLean Explains… about the U.S. healthcare problem and how to fix it. This segment reviews the “Big Fix,” based on the idea of setting limits fairly.

–  PBS News Hour – Why the U.S. pays more for health care than the rest of the world:  https://www.youtube.com/watch?v=gXBPKE28UF0&feature=youtu.be