As Attorney Fisher points out, value-based payment reforms all have in common linking dollars to health outcomes rather than to volume of services. Mr. Fisher has noted that there is growing enthusiasm for value-based payment mechanisms. For example, these innovations to payment reform were the subject of a recent NEJM Catalyst webinar. These payment innovations have also caught the attention of health economist Peter Orszag, as well as health investors.

I have provided other commentary on NEJM Catalyst “Navigating Payment Reform,”  on Dr. Orszag’s blog, and on the Central Pennsylvania Business Journal’s webinar.

Attorney Fisher raises a key methodological problem with rewarding outcomes rather than paying fees-for-service – how to define success and measure it. And, by the way, who gets to do it? Doctors, patients, insurance companies, politicians?

Three other problems with monetary reward systems are the Hawthorne effect, gaming, and perverse incentives.

Hawthorne observed that measuring a system actually changes the system. The Arizona Veterans Affairs Medical Center rediscovered the Hawthorne effect the hard way in 2015 when a whistleblower revealed that the VA’s well-intentioned system of bonuses to reward expedited scheduling had actually spawned an off-the-books scheduling system.

Likewise, gaming the payment system once again came to light in a recent Journal of AMA study, which showed that contrary to claims data that point to a rising incidence of sepsis (collapse due to bloodstream infection), evidence directly from health records shows no change in incidence between 2009 and 2014. The explanation is that insurance pays more for “sepsis,” and so hospitals are incentivized to bill for it more often.

Money perversely affects testing, too. A recent study of insurance claims data published in the Journal of the AMA showed that clinicians who owned imaging facilities ordered CT scans and MRIs for uncomplicated chronic headaches and back pains 2 – 7.8 times more often than those clinicians with no ownership interests.

Doctors and hospitals are only human, and will change their clinical behavior – for good or ill – in response to just a few dollars. Caveat measurements tied to dollars!

As Attorney Fisher points out value-based payment is not a “guaranteed solution” to healthcare reform. He highlights concerns about financial sustainability in the long run. Others have identified mixed results, even in the short run — see Valerie A. Lewis, Ph.D., Elliott S. Fisher, M.D., M.P.H., and Carrie H. Colla, Ph.D., Explaining Sluggish Savings under Accountable Care, N Engl J Med 2017; 377:1809-1811.

Value-based payment attacks one of the key cost drivers in the current U.S. healthcare system – fee-for-service payments. Most would agree with Attorney Fisher that changes like this should not be avoided, and pain and challenges are only to be expected. Problems and more problems are not a reason to stop trying.

At the same time, I have been advocating a more direct solution to value-based healthcare reform – cost-benefit analysis. This approach was successfully adopted by Oregon Medicaid in 1994 to control costs, expand access, and improve quality, as discussed in a recent blog post. 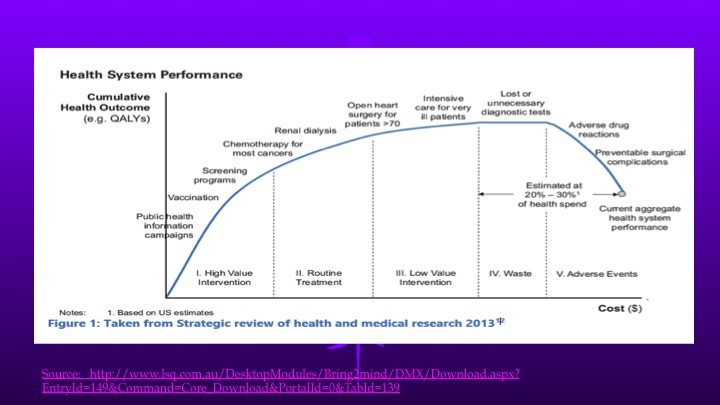 This approach is based on the concept that not all healthcare services are equally valuable. As the U.S. spends more and more on additional services, we reach the “flat” of the marginal benefit curve. Those unnecessary CT scans and MRIs are just one example. We may even reach the point where more services and more spending does more harm than good. For more discussion see “Why Is U.S. Healthcare So Expensive?”

Oregon in 1994 decided to cut services instead of dropping patients in response to a Medicaid budget squeeze. The governor used cost-benefit analysis to rank-order 709 services from most beneficial to least. Actuaries determined the cut-off (Line 581) at which the projected costs would cover all eligible citizens but stay within the tight budget appropriation. The least costworthy treatments were eliminated from the plan while still covering basic, comprehensive, cost-effective care. More details are at “The Big Fix for U.S. Healthcare”.

This approach attacks the cost problem head on. Because no matter how efficiently delivered, how well organized, or how cleverly paid for, low-marginal-benefit services are still low-value.