This segment reviews preconditions for having a focused discussion of healthcare reform necessitated by powerful vested interests, and it discusses how to overcome political polarization.

In the first six Segments, we have reviewed the relentless growth of healthcare spending. And how rising costs are literally built into the system as it is now. This review should give us some ideas on how to fix the system.

But before we talk about how to fix the healthcare system, we must first tackle some landmines that lurk beneath the surface. The landmines are power, politics and philosophy. They are the subject of the next 2 Segments.

In this Segment, we will discuss both preconditions necessary for a calm, focused discussion of healthcare reform as well as what I call “loaded” political words. Then in the following Segment we will look at traditional American values and principles that can be brought to bear on resolving the core philosophical dilemma that has kept us from fixing US healthcare all these years.

Let’s start with preconditions. The idea here is that healthcare now comprises 1/6 of the entire US economy. So, there are powerful interests, lots of money, and fierce political convictions that could derail any discussion before it even gets started.

So, I suggest setting preconditions to be agreed on beforehand. Only then can we calmly get into the meat of the discussion. Here are the preconditions.

First, for purposes of discussion, let’s agree to keep dollar spending at the 2017 level – no winners, no losers, everything the same.

Third, strive to keep partisan politics out of the discussion. Make it a joint problem-solving project. Give credit where it’s due: to politicians or policy writers who contribute constructively. The motto is: “U.S. spells us.” Healthcare employs 1/6 of us and touches all of us.

Fourth, here’s where I will insert a viewpoint from my 40 years experience as a doctor: Human beings all get the same illnesses, all suffer, all are interconnected mind/body/spirits. I – like all doctors — have taken care of rich and poor, all races and nationalities, religious and non-religious, social outcasts and VIPs, saints and sinners. In a hospital bed or in the doctor’s office, we’re all the same. We should remember, “We’re all in this together”

Lastly, since healthcare is “too big to fail,” whatever is done should be done deliberately, slowly, with monitoring along the way and mid-course corrections when needed. If we accept these preconditions, we can have a Win-Win Discussion.

This kind of discussion should look at Facts, Goals, Values and lastly Methods, the actual Fix.

We have already discussed the Facts. The key facts are:

– the US health system has grown to 3.2 trillion dollars, representing 1/6 of the entire economy

– Cost growth is built into the system, has always outpaced inflation, and has resisted attempts to restrain the growth

– Healthcare spending is draining vitality from the economy, government and individual household budgets

Here are the key Goals:

– We must stop excess healthcare growth beyond the natural increase expected from population increase, aging, and innovation.

– To do so will require fundamental reform of the system, not just tinkering with public finance and private insurance

– Since healthcare is “too big to fail”, a key goal is Avoid short-term disruption, again proceed slowly. 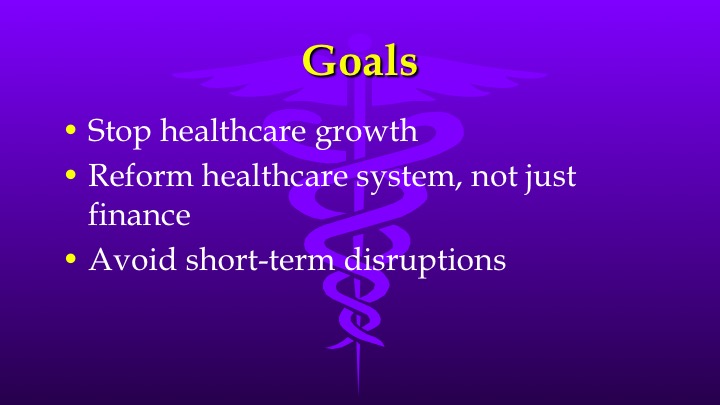 The last things to discuss before we get to specific Methods – what I am calling the Fix of healthcare – are Politics and Values.

We all know that our country is polarized to an unhealthy extent. This has contributed to political paralysis – not getting anything done. I’m not a political scientist and cannot tackle the whole subject of healthcare politics.

But I do want to look at what I call “loaded words” that creep into our debates on healthcare. These words lock us into a closed, rigid mindset and can shut down discussion.

First is “socialized medicine.” This terminology stirs up the negative connotations of the so-called “Prussian menace” after World War I and “Red scare” after World War II. A more neutral term would be “publicly financed medicine.” The truth of the matter is that currently almost 50% of healthcare is already publicly financed through Medicare, Medicaid and other government programs. The issues behind the loaded words, which do need thoughtful discussion, are accountability; and also advantages and disadvantages of uniformity and nationwide scale, instead of the current fragmented system.

The next loaded terms are “free market” and “competition.” The connotations are freedom from government interference, freedom from politics, consumer freedom, and efficiency. The grain of truth behind the terms is that the law of supply and demand does drive down prices to a balance point in pure markets. The reality, however, is that healthcare is not a pure market, as we saw in Segment 5. Also, markets sometimes leave aside consumers who are poor or powerless, which includes many of the sick. A more neutral term is commercial market.

Next is “rationing.” The connotation is forcibly withholding something from an individual. A more neutral term is “limit-setting” or “prioritizing.” We will talk more about this in the next Segment, and about the need for patients’ to consent to limits on their health service or health insurance. The reality is that we already have de facto rationing by zip code, income level, government budgeting, and hospital technology policies. Prioritizing is not bad – it’s necessary.

Another loaded word is “choice.” The connotation is that the government will interfere in choice of doctor or into the doctor-patient relationship itself. This was one of the scare tactics used by the insurance association in 1993 to bring down the President Clinton’s health reform plan. But the reality is that insurance network plans restrict patient choice of doctor more than government rules do. In addition, doctor inclusion in Medicaid – and other insurance plans, for that matter — is often a matter of the pay scales set by Medicaid or insurance companies, not the choices made by patients.

And the last loaded term I’ll mention is “big government.” The connotation goes back to President Reagan saying, “Government is not the solution to the problem; government is the problem.” We always hear about the Army’s 100-dollar toilet seats (in 1986 dollars) and the disastrous roll-out of the Obamacare website. 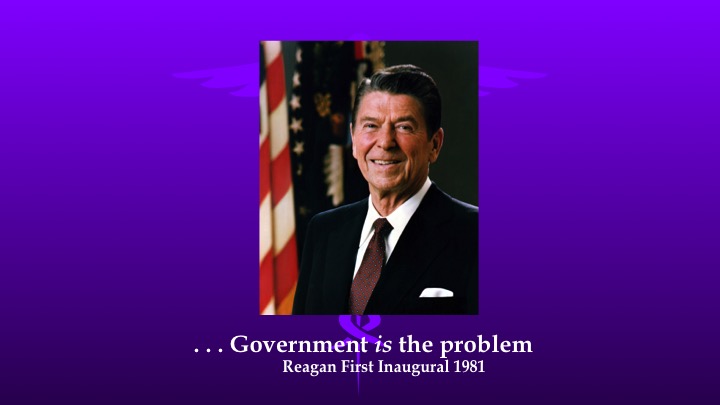 And the truth is that government is big and can be just as flawed as any big institution. However, national government, unlike private companies, is legally transparent and accountable. Also, Government can fulfill some functions more effectively and efficiently than some private sector piecemeal approaches. Here are examples: FAA, FDA, FCC. Currently the military enjoys a high regard. Some examples of public-private partnerships are the moon shot, internet and healthcare research. Medicare has an enviable customer satisfaction rating of 77%.

So we have some better neutral terminology to use for discussing healthcare to avoid inflammatory polemical words.

In the next Segment we will look at American values at stake in health care. We will also look at what philosophers say is a fair way to run US healthcare.

This video is #7 in the series Dr MacLean Explains… about the U.S. healthcare problem and how to fix it. This segment reviews preconditions for having a focused discussion of healthcare reform necessitated by powerful vested interests, and how to overcome political polarization.