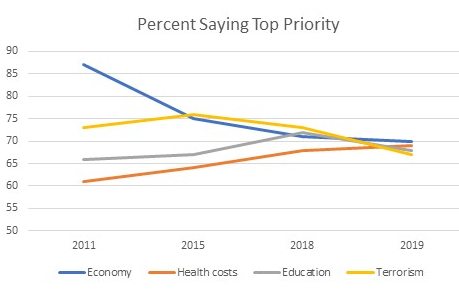 It’s no surprise that healthcare is a hot button political issue in 2019, in advance of the 2020 election. Now a new Pew Research Center poll shows that the cost of healthcare is a top priority for voters, tied with the economy, education and preventing terrorism.

Let’s look at results from five recent polls to better understand voters’ mood on the healthcare cost and related issues. The polls are listed below under References.

Healthcare and Healthcare Cost Are a “Top” Priority

The masthead graphic shows the January Pew study with 69% of respondents giving healthcare costs “top” priority, including 77% of Democrat and 59% of Republicans. This is confirmed by a May 2019 Real Clear Politics poll. Healthcare was “the” top issue for registered voters, edging out the economy 36% to 26%, way ahead of immigration (15%), education (11%) and environment (11%).

A September 2019 Kaiser Family Foundation (KFF) poll found that majorities of Democrats, independents, and Republicans say lowering health care costs and maintaining the ACA’s protections for people with pre-existing conditions should be top priorities for Congress. At least seven in ten Democrats say maintaining the ACA’s pre-existing condition protections (87%), lowering prescription drug costs (81%), and lowering the amount people pay for health care (72%) are a “top priority” for Congress, as do two-thirds of independents (68%, 66%, and 65%, respectively). Fewer – but still at least half — of Republicans also rank all of these a “top priority” (51%, 62%, and 51%, respectively).

Americans Think Their Own Healthcare Is Too Expensive

Real Clear Politics asked respondents if they or their families have been “financially burdened” by medical bills in recent years. Fully 44% answered yes. The poll also found a notable generational divide: Voters 65 and older – those covered already by Medicare – feel far less “burdened” by health care costs than millennials, the fastest growing cohort of the electorate.

Based on that same poll, Gallup extrapolated that in the preceding 12 months alone, Americans borrowed an estimated $88 billion and tapped into long-term savings and retirement funds to the tune of another $126 billion to pay for healthcare.  Over those same 12 months, 38 million Americans elected to forgo a medical procedure, test or evaluation that was recommended by a physician, for a “somewhat”‘ or “very serious” medical condition because they didn’t have enough money to pay for it.

Americans Think That U.S. Healthcare System Is Too Expensive, Broken

Gallup found that three quarters of Americans (77%) say they are concerned healthcare costs will result in significant and lasting damage to the U.S. economy.

Real Clear Politics polled voters their view of the healthcare system.  Their findings:

No Consensus on Best Solutions

The same Real Clear Politics polls found Medicare for all is backed by 82% of Democrats, independents by 2-to-1, and even Republicans evenly split.  Respondent support is 55% when phrased “and will eliminate private health insurance companies.”  But last month’s (September 2019) KFF poll showed most Democrats and Democratic-leaning independents would prefer to vote for a candidate who wants to build on the existing ACA in order to expand coverage and lower costs (55%) than replace the ACA with a national Medicare-for-all plan (40%). KFF found among all voters across party lines nearly seven in ten (69%) of the public favor a so-called “public option” (a government-administered health plan that would compete with private health insurance plans and be available to all Americans), while about half (53%) favor “Medicare-for-all” (a national health plan in which all Americans would get their insurance from a single government plan).

Gallup found that Americans have little faith that the government can fix healthcare; only 8% of Americans say they are confident that bipartisan legislation will be achieved to reduce the cost of healthcare. Ironically, this pessimism is uniform across party affiliation with more than two-thirds of both Republicans and Democrats saying they are “not at all confident” elected officials will be able to work together to reduce costs. Pew found that nearly eight-in-ten Republicans and Republican leaners (78%) expect partisans in Washington to bicker and oppose one another more than usual this year. A slightly smaller majority of Democrats and Democratic leaners (67%) also take this view.

KFF found that half (51%) of the public say they have heard at least some about a national Medicare-for-all plan, but fewer have heard about the public option. Nearly two-thirds (64%) of the public say they have heard either “a little” or “nothing at all” about a government-administered health plan, sometimes called a public option. Fewer than half of the public overall – and fewer than half of Democrats – recognize the differences between a national Medicare-for-all plan that would have all Americans get their health care coverage from a single government plan and a government-administered health plan public option. About half of the public (47%) say the two proposals are either “very similar” or “somewhat similar,” while a nearly equal share (44%) recognize that the two proposals are either “very different” or “somewhat different.” There are no partisan differences in the perceptions of the similarities of the two proposals.

Partisan Divide on Principles of Reform

KFF’s poll indicates that majorities of Democrats, independents, and Republicans say lowering health care costs and maintaining the ACA’s protections for people with pre-existing conditions should be top priorities for Congress. At least seven in ten Democrats say maintaining the ACA’s pre-existing condition protections (87%), lowering prescription drug costs (81%), and lowering the amount people pay for health care (72%) are a “top priority” for Congress, as do two-thirds of independents (68%, 66%, and 65%, respectively). Fewer – but still at least half — of Republicans also rank all of these a “top priority” (51%, 62%, and 51%, respectively). Republicans and Democrats disagree on the more partisan health care priorities with large shares of Democrats saying expanding financial help to those who buy their own coverage on the ACA marketplaces (49%) and implementing a national Medicare-for-all plan (44%) are top priorities for Congress, while a large share of Republicans (46%) say repealing and replacing the ACA is a top priority.

A Unique “Deliberative Poll” – America in One Room

America in One Room brought together 500 voters from across the nation reflective of the electorate, under the auspices of Stanford University.  Over the course of a 4-day weekend in September 2019, the group reviewed balanced information curated by experts and academics.  After civil dialog, almost everyone moved toward a more moderate compromise position on health care, as well as immigration, foreign policy, economy and environment.

Support for automatically enrolling everyone in a more generous version of Medicare (“Medicare for All”) eroded from 48% to 40% with the drop again coming mostly from Democrats (Democratic support fell 14 points from 70% to 56%). On the other side of the political spectrum, repealing the Affordable Care Act (Obamacare) fared even worse. Support for repeal dropped from 35% to 25%, with most of the drop coming from Republicans (from 68% to 48%).  There were significant increases for some more centrist proposals: increasing the federal subsidies in the Affordable Care Act that help the poor rose from 55% to 60%; expanding these federal subsidies to the middle class rose from 60% to 72% and ensuring that people should have reasonable access to health insurance regardless of pre-existing conditions rose from 90% to an impressive 97%.

Americans clearly see the “broken” healthcare system and its ever-rising costs as challenges that threaten all and directly affect many in their pocketbooks and lives. Most politicians, pollsters and analysts do not yet recognize the underlying cause, however, which this blog claims is an unchecked system of waste and greed. Only a few understand that only the force of concerted public will, acting through government, can muster the clout and authority to begin unrigging the tapeworm machine, one cog at a time. America in One Room demonstrates that Americans can come together, dialog civilly, and reach practical middle-ground compromise.

The masthead graphic was created by the blog author based on the table titled “Public’s policy priorities: 2011 – 2019 – % who say __ should be a top priority for the president and Congress” contained in “Public’s 2019 Priorities: Economy, Health Care, Education and Security All Near Top of List,” published by Pew Research Center, Washington, D.C., January 24, 2019.  Copyright 2019.  URL: https://www.people-press.org/2019/01/24/publics-2019-priorities-economy-health-care-education-and-security-all-near-top-of-list/ . Used in compliance with Pew Research Center’s Terms of Use in furtherance of the Center’s mission to inform the public debate on important issues.